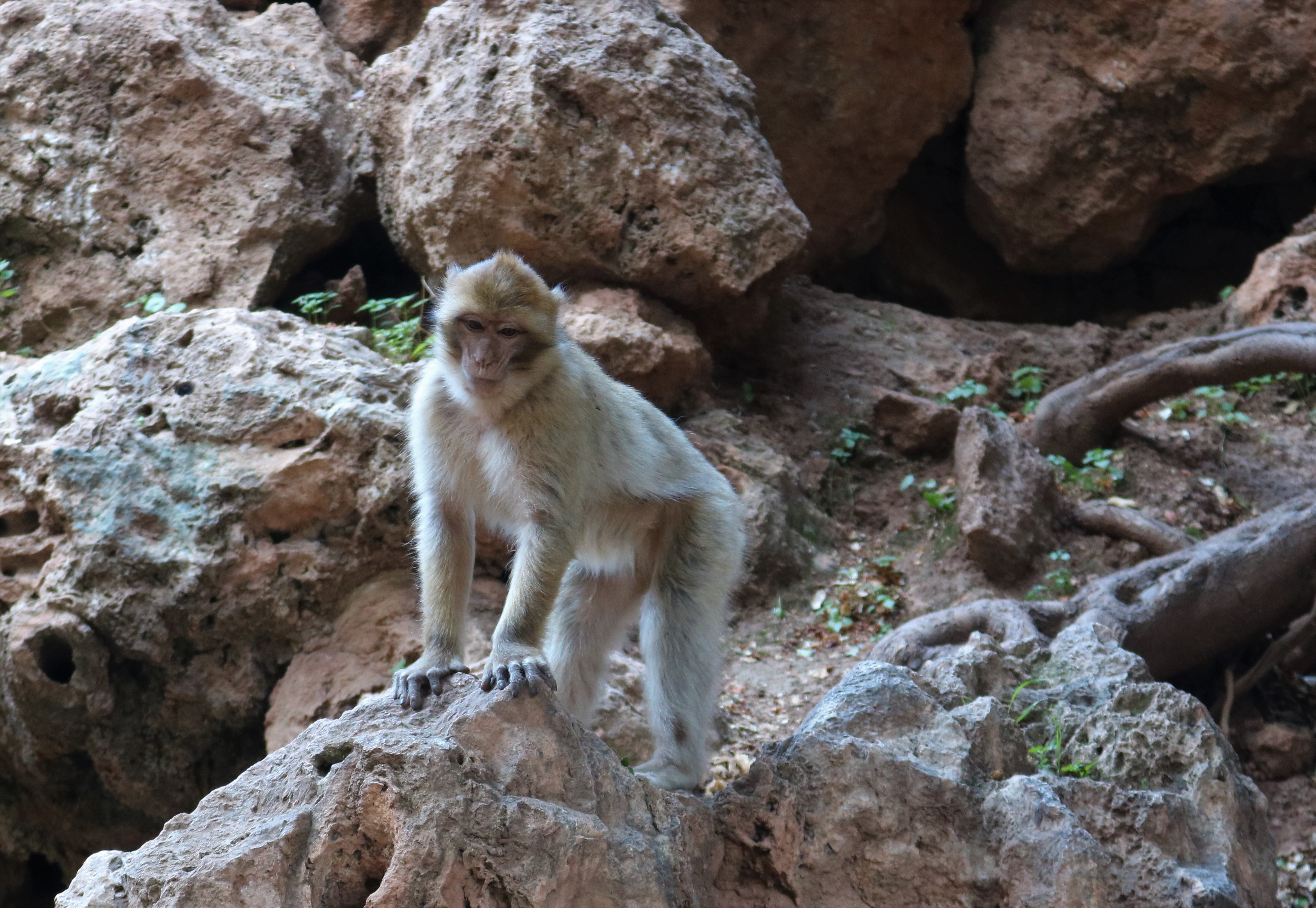 If you’ve been following my journeys, you know we used Marrakech, Morocco as a springboard to travel and soak in as much Moroccan culture, sights, and experiences as we possibly could in the short 6 days we were there. The country boasts so much to see and do, and I feel like we only scratched the surface! (Hmmmm, maybe a repeat trip?) We booked a day trip to Ouzoud Falls on Viator, and we were extremely pleased with it. The trip exceeded our expectations, mostly because of my face to face encounter with cutest little monkeys, but also the outstanding service and ease of the tour logistics. The tour operators even contacted me via WhatsApp to ensure I had seen the email about pickup location. We booked through Viator, though there were travel booths in Marrakech selling trips to the falls as well. I saw some negative reviews online, but I’m glad I didn’t let them deter us, as we had a fantastic day.

The trip began with our pickup in Jemaa El-Fnaa, outside of Cafe France. We rode in an air conditioned mini bus to the falls, about 3 hours since we stopped to pick up other passengers on the way. There was a bathroom/coffee stop on the way. As I mentioned in my previous post, I’d recommend bringing tissues or toilet paper, as it appears to be a luxury in Morocco and not often found in public restrooms. The ride to Ouzoud Falls is pretty, passing through smaller villages in Morocco, and heading through part of the Atlas Mountains.

Once we arrived at the waterfalls, we were greeted by our guide, Ibrahim. He was very interesting, and shared a plethora of information about the falls and the area. He noticed a group of us (ok, me) immediately distracted by a few of the Barbary apes that live near the falls, and he promised there would be more later — and he was right! The falls were supposed to be the main attraction (and they are beautiful) but my favorite part was the adorable monkeys. More on that later… Ouzoud Falls is comprised of several waterfalls in the El-Abid River Gorge. In the Berber language, “Ouzoud” means “act of grinding”; this is appropriate as there are many mills in the area. Ibrahim also shared that Ouzoud Falls are the highest falls in Africa. They are 110 meters tall, while Victoria Falls is actually 108 meters tall. Despite being 2 meters shorter, Victoria Falls is the largest waterfall in Africa due to sheer volume and size.

Our day at the falls began with a trek down the hills towards the base of the falls. The trail was a bit uneven and a dirt path. You certainly don’t need hiking shoes, but I wouldn’t wear sandals or flip flops either. We enjoyed seeing the monkeys up close on our journey down the falls. They are friendly, and will climb on your shoulders if you let them. While they will climb on you and appear comfortable around humans, our guide told us not to try and pick them up. Apparently, when tourists try to pick them up they can scratch and bite because they think they are being taken into captivity. These monkeys seem very familiar with humans and were expecting food. Our guide gave them some peanuts to keep them around us. I had brought raisins as a snack for the bus and the monkeys enjoyed eating them. The guide even got them to climb on our shoulders briefly. These Barbary apes are found in the Atlas Mountains of Morocco and Algeria, but sadly are considered endangered as their population is declining. There is a small population of Barbary apes found in Europe – in Gibraltar. Gibraltar is the closest point from Europe to Africa, so they were likely brought over by humans. We found these monkeys to be adorable and sweet, and perhaps even more exciting than the waterfall itself.

On our way to the base of the falls, we passed through greenery and olive trees. We walked through the olive trees and headed to a traditional Berber home. A traditional Berber home is enclosed but has an open area in the middle, where there is no roof. Our guide explained to us that Berber children are usually learning 5 different languages by the time they are young teenagers! At this home, they made argan oil, which is something Morocco is known for, and can be used in your hair, dry skin, and a variety of other purposes. Of course, they had a shop on site were they sold it.

We arrived at the base of the falls to a stunning view of Ouzoud Falls, which comes together in a gorge. There’s a small river which must be crossed in order to get to the other side to walk back up the cliffs. You are taken across the river on a wooden boat, which pauses to get close up pictures of the falls. Once on the other side, you have a decent climb back up to the top, but it’s nothing too intense. There are a few options for souvenirs, and then the tour ends with a delicious Moroccan lunch (at your cost) before driving back to Marrakech. We enjoyed this beautiful day outside of the hustle and bustle of the Medina, and if you can’t tell, the monkeys were a huge hit! I’d recommend finding a tour such as this one that takes you out of Marrakech, so you can see more of the country.