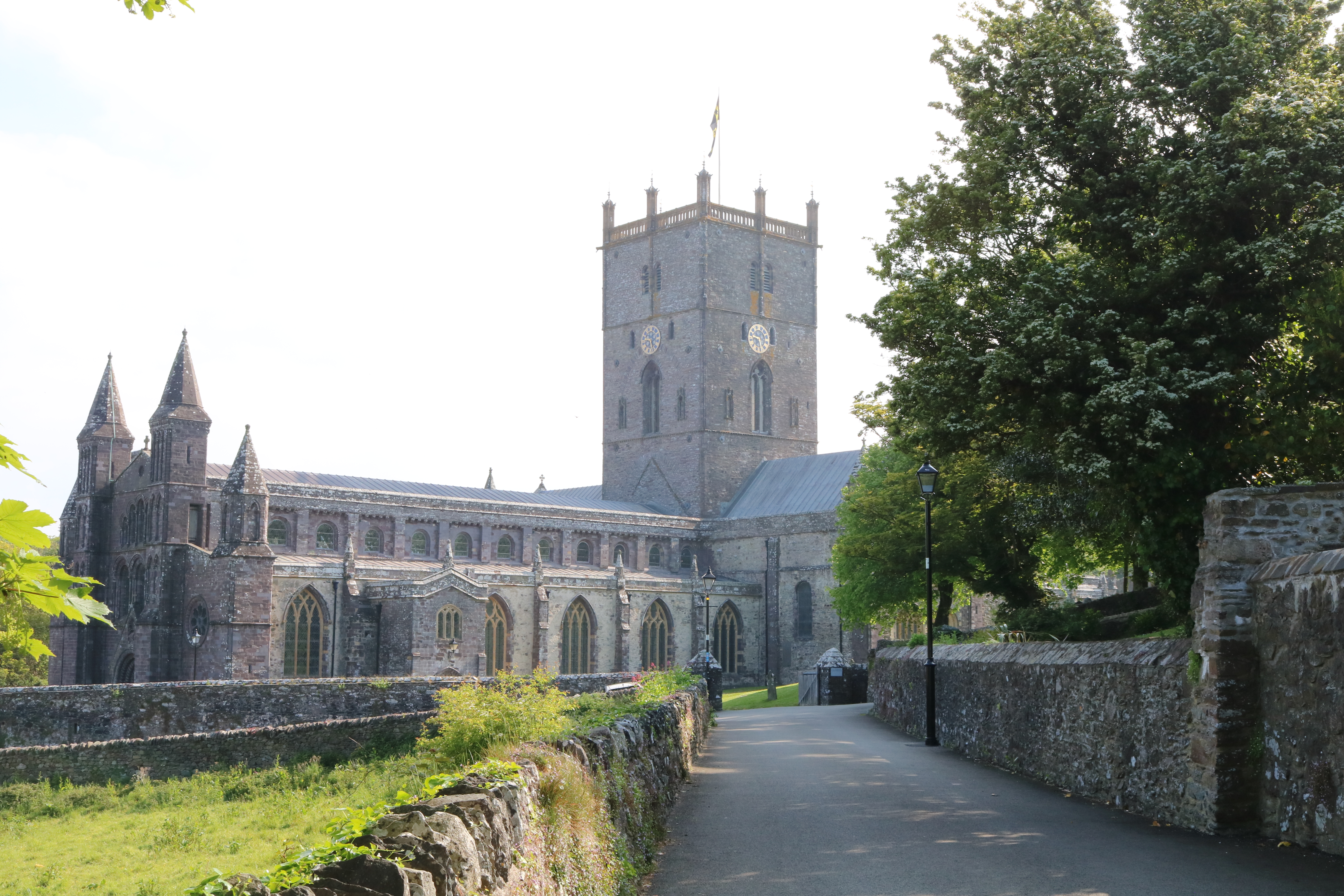 Before I moved to England, I thought the United Kingdom was entirely synonymous with England. I guess I just thought Wales (and Scotland) were their own separate countries. Wales is definitely in driving distance (around 5 hours) from where we live, and the thought of driving to another country is just so cool! Especially when you don’t have to go through customs. I honestly didn’t know much about Wales, but was intrigued about the other side of the island. Before booking our weekend adventure, I just knew I wanted to see the coast, ride my bike, do some hiking, and see castles. The last bit is super easy; Wales is known for castles! Wales is a rather small country, but there are 600 castles (though some are ruins). Lucky for me, I was able to check everything off of my list during our short trip to Wales!

Pembrokeshire, Wales is a gorgeous area! There is a lot to do an see there, and traveling by car is almost essential. It’s the type of place where you stop and enjoy the view and see a few sites as you drive along the coast, or drive to your destination. We tried to plan it out as best we could, but we were still in the car a lot, and heading in every direction trying to see everything. Pembrokeshire boasts 186 miles of coastline and 50 beaches, so we were in for quite a treat. The beaches and coastal formations in the United Kingdom are incredible; you don’t really think of blue-green water and beaches when you think of England, Wales, Scotland, and Northern Ireland, but they truly are fabulous! The Pembrokeshire region definitely has some great ones.

We headed out on a Saturday morning, and our drive was pretty uneventful. We hit the usual traffic around London, but nothing major. As we were getting closer to Wales, we saw signs for heavy traffic; it looked like the traffic was heading towards Cornwall and thankfully not where we were going. That said, maybe Bank Holidays aren’t the best travel days in England? Next time we will get up a little earlier to avoid the rush and give us more time at our destination. Our first stop of the day was Pembroke Castle, in the town of Pembroke. Wales is known for it’s castles and this one was definitely a treat! Pembroke Castle is the largest privately owned castle in Wales. So often we will visit castles and they are more like ruins, and not very elaborate. Pembroke Castle was rather incredible and looks like a real castle. The first castle on the site was built in 1093 during the Norman Invasion of Wales. The castle we see today was built in the 12th century. In 1457, Harri Tudor was born in one of the castle towers. He later became Henry VII of the Tudor line of Monarchs.

I first discovered the Green Bridge of Wales when searching for hikes and things to do in Pembrokeshire. I was immediately captivated by the photos I saw, and knew we were making the right choice in exploring this area of the coast. While similar to my recent post about Durdle Door, the Green Bridge of Wales is also a limestone arch. The geology of the area contains carboniferious limestone, and over time the arch has eroded from rock and wind, along with chemical erosion. The Green Bridge is aptly named, as vegetation grows near and on the rock formation. It is found on the Pembrokeshire Coast Path, and if we had more time, we would’ve walked much further along the path. Prior to our visit, in 2017, the formation lost a lot of rocks due to Storm Ophelia, which I remember creating havoc in the United Kingdom, particularly Wales. The Pembrokeshire Coastline is absolutely stunning, and a must do if you like to hike!

It started getting pretty windy and rainy, so after exploring a little more of the coast, we headed to our hotel to check in. If you’ve never driven in Wales, particularly the countryside, there’s no way for me to fully explain the narrow, curving, backroads we took to get there. Roads that can barely fit one car, are actually two lane roads with a 60mph speed limit! We had a brush with death every time we took a turn, and many times we just honked and hoped for the best. We didn’t crash, or get a flat tire, so we called it a success! After an hour or so of being a panicked passenger trying not to toss my cookies, we arrived in St. David’s, the small city we stayed in.

We stayed at the City Inn in St. David’s. I’ll be honest and say we didn’t love our hotel. It was loud, smokey (it seemed to seep in through the windows even though it was supposedly non-smoking), and there was only a tub with no shower attachment. On the plus side, it had a delicious breakfast, pub downstairs, and was convenient to town. The parking lot was also a plus since we drove to Wales.

When we arrived, we headed out for a short evening hike. Once heading out of town, we found a path along the campsites. The Pembrokeshire Coast has a plethora of campsites for those who like to camp, either in a camper or a tent. This appeared to be a very popular location for camping. We tossed around the idea of going back and camping, but who knows if we will; after all, I like a comfy bed and pillows! We arrived at the coast during “golden hour” and it was beautiful. We headed down a trail that took us to the beach and dipped our toes in. Despite the cold water, several people were swimming. As former triathletes, we would describe the water as “wetsuit legal”. We decided to head back up the steps to walk around on top of the cliffs. We ambled along for an hour or so, and the views were incredible. We knew in that moment we made the right decision to come hiking and biking in Wales instead of heading to a city.

The next morning, after a delicious full English breakfast, we headed out on our bicycles. We are former triathletes in our past lives, so we brought our tri bikes with us. In the past, we would train for Ironman races, and would ride on the road for 80-100 miles. While our bodies aren’t capable of that any more, we are still able to go for 20-30 mile rides! We thought we’d seen it all during those days, but nothing prepares you for biking on the narrow, hilly, windy roads in Wales, as cars go by! All in all, it was a great ride through little villages, complete with views of the sea. We are flatlanders, so the rolling hills were a nice change of pace. Despite the on and off rain, we enjoyed ourselves and even got close up and personal with some sweet lambs!

After our bike ride, we headed back to the hotel to change for our hike! We wanted to make the most of the short weekend in Wales, and the coastline is just so stunning that we had to explore. There are so many places to hike along the Pembrokeshire Coastline, you really can’t go wrong. We parked near a campsite again, and just went on our merry way! We hiked from St. Justinians along the coast to Whitesands Bay. One of the best parts of the hike, aside from the ocean views, was seeing all the wild horses on the trail.

That evening, after being exhausted from hiking and biking, we decided to venture to a small harbor town called Porthgain. We had read about supposedly “the best fish and chips shop in Wales”. The line was out the door and wrapped around the corner, so we decided to wander around. We stumbled into a pub called The Sloop Inn, and had a delicious seafood dinner. The atmosphere and service was good, and I would recommend it.

We headed back to the hotel early, and intended to get some sleep. However, it was so loud from the pub downstairs, that we decided to just go have another beer. The next morning, we did some wandering around St. David’s, and visited St. David’s Cathedral. Here’s an interesting story — St. David’s in the smallest city in all of the United Kingdom. In fact, it’s smaller than some towns and villages, but it’s still considered a city because it has a Cathedral. In order to be granted “city status” in the United Kingdom, you must have a Cathedral, not just a Church. St. David’s Cathedral is absolutely beautiful, and it’s worth checking out. Construction began on the current cathedral in 1180, but there has been a church on that site since the year 600. It has been a pilgrimmage site for 4,000 years, as St. David is said to have born nearby. There are ruins of St. David’s Palace on the property as well, which are fun to explore.

After exploring St. David’s and the Cathedral, we headed towards the coastline again. We had a boat trip around Ramsey Island booked. We arrived early, and of course did an easy hike in the area surrounding the harbor. Our boat trip was around the island, on a RHIB boat. The island is home to lots of wildlife, particularly birds. Later in the season it is common to see puffins. We did see one fly by very quickly, but didn’t get a good glimpse. The tour was incredible, with our guide who was full of knowledge about the area. One word of caution – the temperature dropped from about 70F and sunny, to about 45F and foggy once we left the shore, so dress accordingly! We were able to marvel at the beautiful cliffs and formations around the island. I did my best to take pictures but it was hard on a small, moving boat, and the last thing I wanted was for my camera to end up in the water! We really enjoyed this tour, and highly recommend it as it gives you an opportunity to learn about and see some of the birds on Ramsey Island.

We were so glad we made the drive to Wales for the weekend! We’ve talked about going back, perhaps to Northern Wales and Snowdonia. Any recommendations??